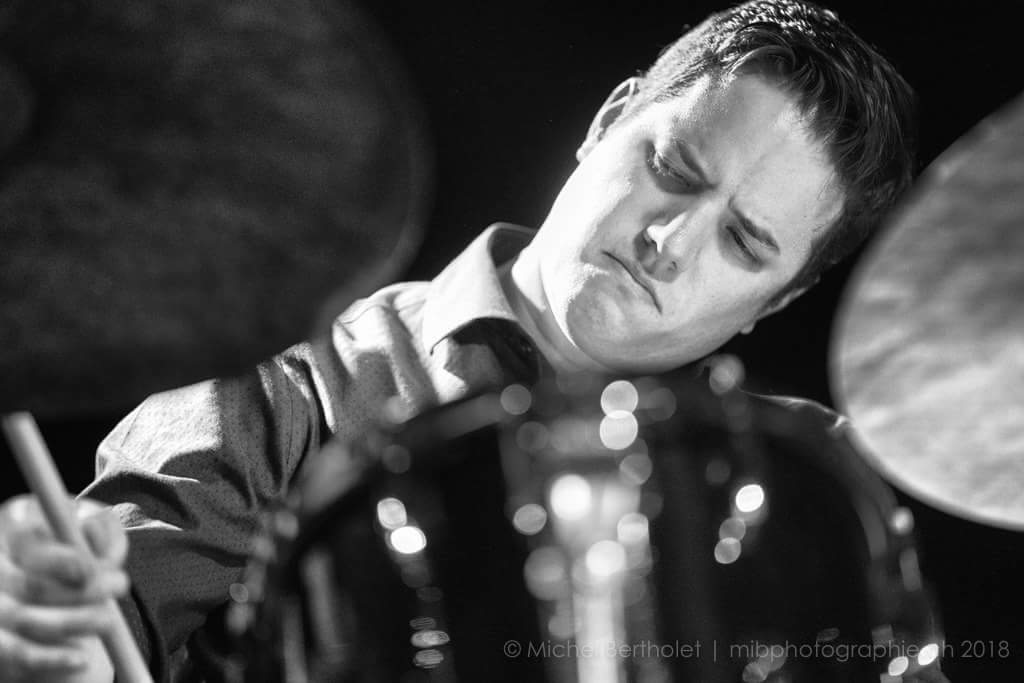 In all these settings, as J.D. Considine of JazzTimes has written, Cervini “drums like someone who’s an arranger at heart, carefully placing each accent for maximum melodic impact.” He’s been cited by Modern Drummer for his old-school knowledge and feel in the spirit of Art Blakey and Billy Higgins, yet credited by Musicweb International as a maker of music “grounded in the language of hard bop but not confined by it.”

Canadian drummer and composer Ernesto Cervini continues to amaze…
Georges Tonla BriquetJazz Halo
Tetrahedon delivers stirring music with its fresh and engaging tunes and with electrifying performances that daringly and expertly skirt the edge of the precipice.
Mel MinterMusically Speaking
It's safe to say Tetrahedron signifies a bold new chapter in Cervini's ongoing story, the group's acoustic-electric fusion a promising harbinger of things to come. With the drummer having so many other group projects on the go, it's impossible to know when a sequel to this memorable debut effort will appear but with any luck it'll be sooner than later.
Ron SchepperTextura
With their CD release Tetrahedron, Ernesto Cervini and his group have crafted a distinctive twenty-first-century sound, pushing the drummer-bandleader's vision forward, as always. ★★★★
Dan McClenaghanAll About Jazz
The interplay between all "four faces" makes this album a true winner. Highly recommended. ★★★★1/2
Keith BlackWinnipeg Free Press
Ernesto Cervini continues to make great strides on the contemporary music scene, getting and holding one's attention with his myriad creative projects. His music searches, probes, explores even as it swings, sways, rocks, and dances through your mind.
Richard Kamins Step Tempest
Adventurous and riveting improvisational risk-taking from the quartet is topped with gifted writing and the unit’s seemingly effortless technical wizardry, affirming that this bandleader is an artist on the rise.  4 Stars!.
Kerilie McDowallDownbeat Magazine
Despite the presence of “electricity”, the music of the album resembles, rather, not fusion, but a solid post-bop, where the basic principles were filled with new, modern content. The album sounds less than fifty minutes, but the creativity of the musicians significantly compresses this time - it flies unnoticed to the music of Cervini and his colleagues.  (Translated from Russian via Google Translate)
Leonid AuskernJazz Quad
Cervini recalls such old-schoolers as Art Blakey and Billy Higgins…his robust, magnetic personality fascinates consistently.
Modern Drummer
Gracefully propulsive, Cervini doesn’t impose himself on the music. He purrs underneath it, lithe and impeccably balanced, like a 12-cylinder Jaguar, with stunning power to spare at a moment’s notice. He displays flawless technique and a rhythmic instinct that delivers surprisingly well-placed accents in unexpected places. His cymbal work calls to mind the great Jimmy Cobb – so clean, expressive and effortless.
Mel Minter
Rev is the second album from Ernesto Cervini’s Turboprop, and it’s a shoot-the-lights-out blast of a listen... The group has an infectious, propulsive energy that delivers a power punch without forsaking nuance and melody... Here and throughout the entire program there’s a sense of closeness and shared spotlight, playing with, around and through, but never over, each other... Overall, Rev is a bright wave of an album and Turboprop is the real deal. Turboprop will be on the road in 2018 and I, for one, would love to see this band live.
Frank Alkyer Downbeat Magazine
Cervini drums like someone who’s an arranger at heart, carefully placing each accent for maximum melodic impact...Turboprop is the sort of band that places as much emphasis on the writing as it does on the improvisation, with arrangements that underscore the ensemble’s interplay while ingeniously framing the melody. Abundance is the best sort of musical uplift.
JD ConsidineJazz Times
This Canadian drummer/leader’s latest manages to swing convincingly between both the manic and somber poles of jazz, leaving listeners with a fresh, energetic expression of a classic form.
Keaton LamleModern Drummer Magazine
Guided by Cervini’s driving, effervescent rhythms, the group’s eponymous debut album jaunts into the realms of chamber jazz, balladry, hard bop and free jazz.  Regardless of the stylistic focus, the results are always alluring and rendered alternately with polish and precision or daring excitement.
Mark Holston
Ernesto Cervini is blazing a path through contemporary jazz with smart new ideas and a burning intensity that shouts to be heard.  An album that has to be one of 2011’s best.
Geoff ChapmanWholenote Magazine
A perceptive young drummer…an energetic album!
New York Times
Cervini’s roaring solo on that highlight tune (Fear of Flying) brilliantly exploits the groove’s quirky overlapping duple/triple tension. Swinging and spirited, Cervini turbo-propels this tight and spontaneous sextet.
Modern Drummer
Bold Canadian drummer Ernesto Cervini exemplifies 'float like a butterfly, sting like a bee'"
Downbeat Magazine
Previous
Next
{{list.tracks[currentTrack].track_title}}
{{list.tracks[currentTrack].album_title}}
{{classes.skipBackward}}
{{classes.skipForward}}
{{this.mediaPlayer.getPlaybackRate()}}X
{{ currentTime }}
{{ totalTime }}